If you told me a year ago I’d be attending the next Xbox E3 Briefing, I would not have believed you. Yet there I was with the Xbox green glow of the stage washing over me, only moments away from the very first announcements of 2016. I knew I couldn’t have asked for a better year to be here with the reveal of the Xbox One S right out of the gates. My excitement only built from there with a stack of new games, new controllers, and the cherry on top, Scorpio!

My favorite highlight, without question, was “Sea of Thieves.” I have always loved the allure of sailing the high seas, and the odd appeal of looting and plundering for riches and rum. It was hilarious watching that crew learn to pilot their new ship, especially when they discovered they were slowly sinking after their first combat at sea. I was fortunate enough to take the helm later that evening at the Xbox Showcase, and it was everything I’d hoped for and more! We set sail for adventure, and quickly found it, as another crew was already closing in on us ready to send us down to Davy Jones’ Locker. “Hard to starboard, fire the port cannons! We’re taking on water boys!” Working together as best we could, we fought valiantly eventually dooming our enemies, but were ambushed by a third ship and soon found ourselves headed to the deep. As we sank, I stood on the bow playing a fateful tune on my accordion. Without question, I will be picking up “Sea of Thieves” as soon as it’s out. I cannot wait to put together a crew and start my new career as a scallywag of the Caribbean!

Day One on the E3 show floor was just as exciting as the Showcase the night before. I made a bee-line for the Xbox booth to get my hands on some of the other new titles, and of course, start collecting that precious E3 swag! “Forza Horizon 3” was another title I was very excited to play, as I’ve been a big fan of the first two in the series. I got the full experience of a trek in the Outback driving in a full simulation racing chair, feeling every bump and jostle as I raced a Willys Jeep, suspended by helicopter, through the bush. My skills behind the wheel paid off, as I crossed the line in 1st – earning an awesome FH3 shirt! Among the many other games to demo, some of my favorite experiences so far have been an epic six player match of “Halo Wars 2” (which is available in beta now!), Recore’s unique color-coded weapon’s gameplay and adorable robotic companions, and roasting pilots in their cockpits with one of the six new Titans coming in “Titanfall 2.”

Trying out the latest games isn’t the only great thing about E3: I’ve had the pleasure of running into several Xbox Ambassadors on the show floor! It’s been awesome getting to hear all the great experiences of helping other gamers and connecting with our awesome community. Also, a big thank you to everyone who came out for the Ambassador Meet-up Tuesday night. I can’t wait to have more events and meetups at future shows! 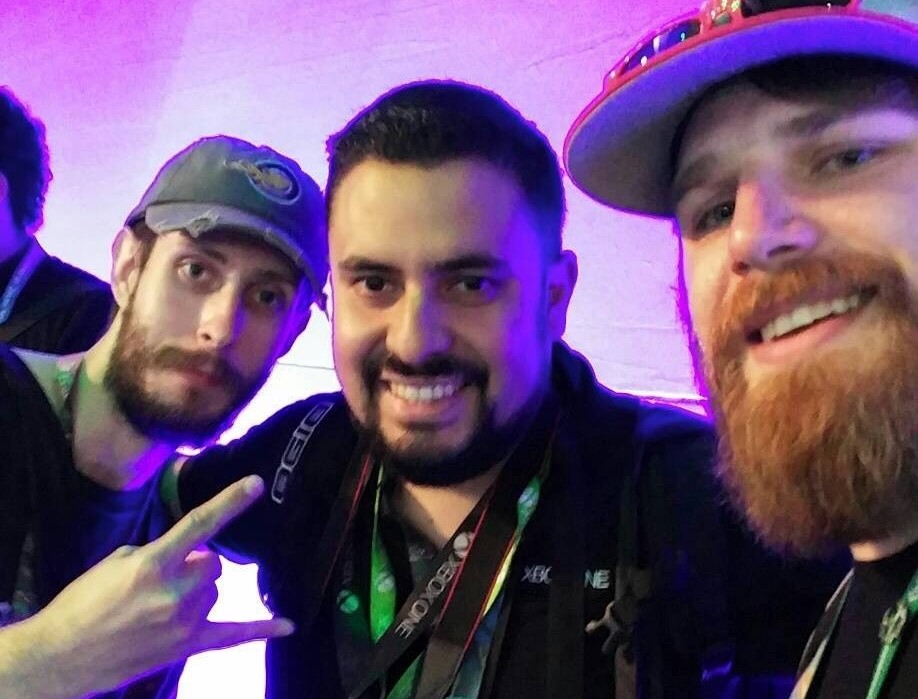 Pictured above: Mister Discord ran into two Ambassadors waiting in line for “Recore.”

There’s so much more for me yet to see, so back to it for another day of this amazing show! Be sure to follow me on Twitter, @Mister_Discord, for the latest in my adventures here at E3 2016.